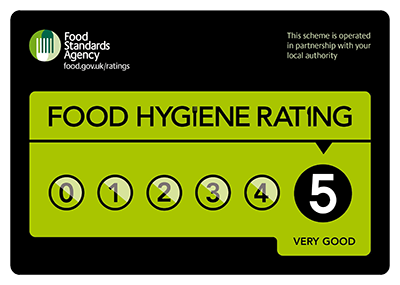 To think, It All Began With a Curried Egg…

Home/Caterers in London, London Caterers, Private Dining Caterers/To think, It All Began With a Curried Egg…

To think, It All Began With a Curried Egg…

So, the first real meal I ever cooked myself was Curried Eggs – a recipe I gleaned from a Jewish cookery book that I found in my Mum’s collection. I was about 13 years old and it gave me such a real sense of achievement that I never looked back. Curried Eggs is not exactly haute cuisine, but for me it was exciting and quite revolutionary – having been brought up on a repertoire of Spaghetti Bolognese and Stew of all descriptions. The Bolognese was quite harmless, but the stew was another story altogether. If it had lamb in it, it was Irish stew, beef then it was Beef Casserole – add some paprika then it became Goulash and on day four some kidney beans were thrown in for good measure with a spoonful of chilli powder, and as if by magic that stew metamorphosed into Chilli con Carne. Stews were also differentiated by their ‘nationality’ – a little perplexed one evening I asked my Mother what Russian stew was and she replied that she’d had a large vodka while making it! These meals were invariably followed by Angel Delight or a good helping of what became affectionately known as Harriet Salad – fruit salad to you and me. (It’s just that every time my sister’s friend Harriet came for tea that damned fruit salad was still there.) I swore that I would never inflict my Mother’s style of cooking on my own children when the time came. Sorry Mum. 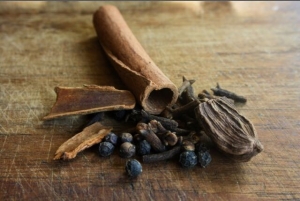 So, from Curried Eggs onwards things got quite exciting for me. Let’s be honest, things couldn’t have got much worse than that cheesy 1970s take on pseudo-Indian kosher food! By experimenting in the kitchen I discovered that I really loved cooking and eating food – my food.

I have been somewhat spoilt in terms of my culinary experiences outside of home. As a young child I travelled extensively around Europe and parts of the Middle East and ate in some of the best restaurants. My taste buds became as privileged as my background thanks to parents with discerning palates. After university I worked as a buyer for a large retail chain which involved numerous overseas trips – from Chicago to China – eating ‘local’ food wherever I went. The influences of these sumptuous meals eaten around the world really inspired my cooking. If I enjoy something in a restaurant I’ll always have a go at recreating it at home – although, I must confess, not always with success! Sometimes it’s just a hint of an ingredient that gets my attention – something new, or perhaps a flavour combination that’s quite obvious but which I’d never tried before. I remember the first time I experienced char-grilled swordfish with a Parmesan coating. I had been under the illusion that fish and cheese combined were an absolute no-no. To my delight this slightly tangy mix of Parmesan cheese, breadcrumbs, paprika and freshly ground black pepper worked. Served with a generous squeeze of lemon, fresh green beans with the barest hint of garlic (al dente of course) and some roasted new potatoes, it was perfect, yes, perfect. 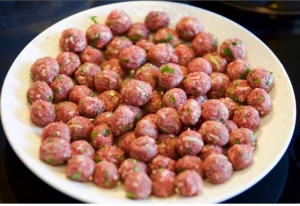 Other culinary inspirations come from my ethnic background. Well, you’ve heard of Heinz 57 varieties – some say that I personify the brand. A sketch of recent branches of the family tree will demonstrate the point. Mum is English-born and bred, Dad is Israeli, Grandparents are Irish, English, Polish and Hungarian (from Polish decent); so even the direct influences are a strange hybrid of Middle-Eastern, Celtic, Eastern and Western European. And then, as if to add insult to injury, I married an Italian! It’s the creation of an amalgam of some or all of those influences which can create sumptuousness and an opulent quality. There’s something wonderfully homely about the food I cook and love, and there’s always lots of it – I never know when that small battalion might turn up!

When it comes to cooking it is not just about the taste of the food or the appearance. It’s almost a sensual evolution – from the feel, look and smell of the fresh raw ingredients, lovingly prepared, pared and cooked, to the rich, lush, intense aromas rising and wafting towards me from the pan with a little help from my ever-beckoning hands. The effect on the eyes, nose, and even the ears of that finished article waiting to be plated as creatively as possible. And then the taste, oh yes the taste. Can’t be bothered to eat what you’ve prepared by the end of the process? Au contraire mes amis, it’s all worthwhile at this point, when you can delight in those wonderful flavours you’ve created. And such a feeling of total pleasure when all those senses are aroused, when it comes together, the total satisfaction….mmmmmm. And then, to be able to share that experience…well! To show your love for those you love – there’s no comparison. It’s the ultimate demonstration of devotion when a meal is prepared and served with a huge chunk of enthusiasm, a soupçon of zeal and a good dollop of dedication.

You can find out more about which cookies we are using or switch them off in settings.

This website uses cookies so that we can provide you with the best user experience possible. Cookie information is stored in your browser and performs functions such as recognising you when you return to our website and helping our team to understand which sections of the website you find most interesting and useful.

Strictly Necessary Cookie should be enabled at all times so that we can save your preferences for cookie settings.

If you disable this cookie, we will not be able to save your preferences. This means that every time you visit this website you will need to enable or disable cookies again.